The 5 chemicals that control your behavior

By now it’s no secret that chemicals in our brain play a crucial part in our psychological well being, but how exactly does the whole process work? And why does this aspect of human biology even exist?

Things you can learn from this article include:

The biological source of our happiness comes from a part of our brain called the limbic system, which releases the ‘feelgood’ chemicals: dopamine, oxytocin, serotonin, endorphin.

The limbic system releases these chemicals as a survival mechanism, it directs our behavior into doing things that are beneficial to our existence, such as eating something, having sex or enjoy the company of other humans. Conversely, if what we interact with is threatening our survival, our limbic system releases stress chemicals, the most important of which is cortisol.

Onto to the chemicals. Out of the 4 mentioned above, dopamine is the go-getter. Subconsciously, our brain constantly scans the environment looking for survival boosting stuff. When it does find something, such as a tree full of fruit (if you are a prehistoric human) or a fast-food joint (as a modern one), then your brain releases dopamine, urging you to go and take advantage of this survival opportunity.

The fun part about dopamine is that you can be socially conditioned into receiving a rush from certain stimuli, such as a new phone or car, but for people who haven’t been subjected to this, the stimuli won’t generate a reaction until conditioning takes place. 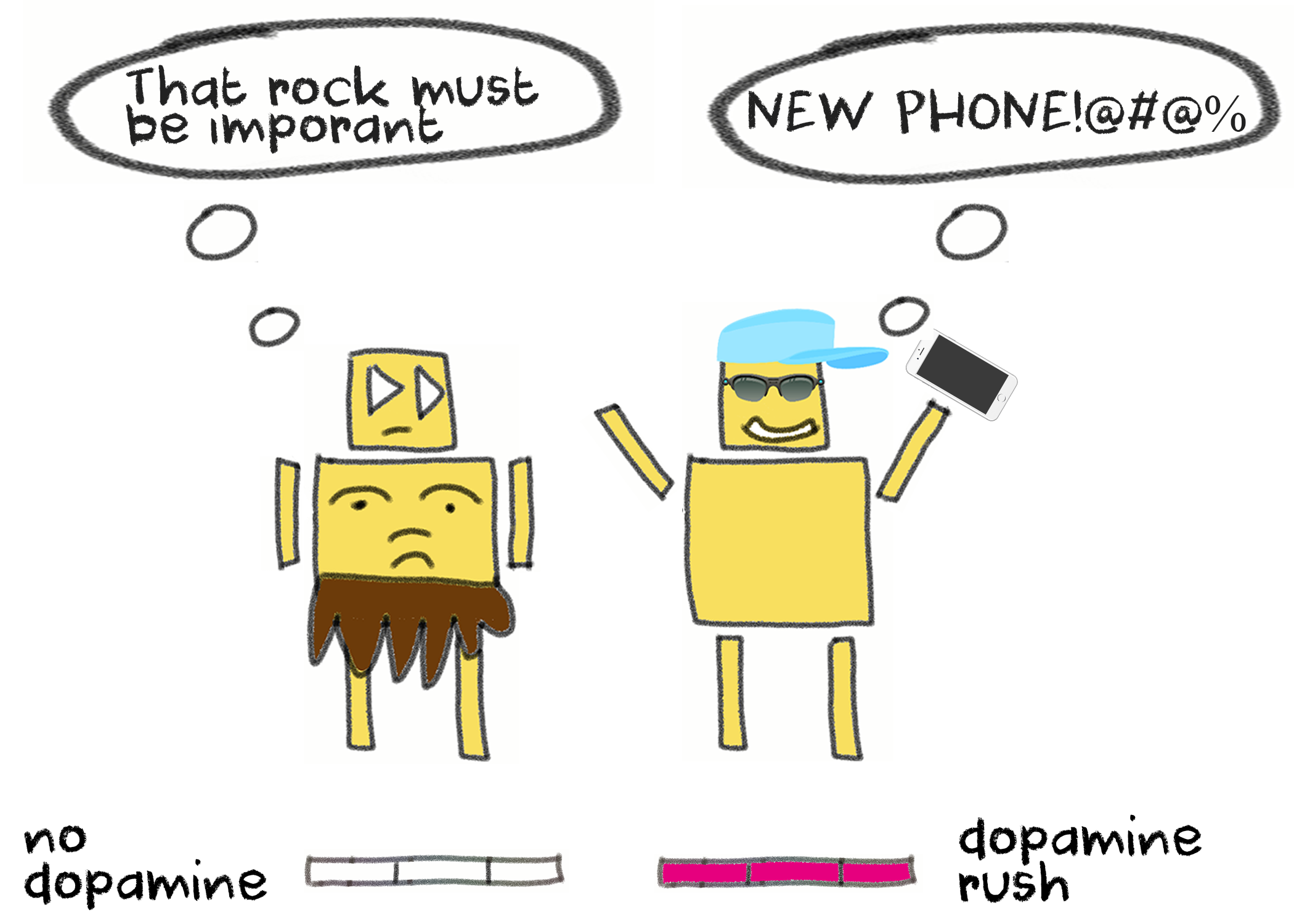 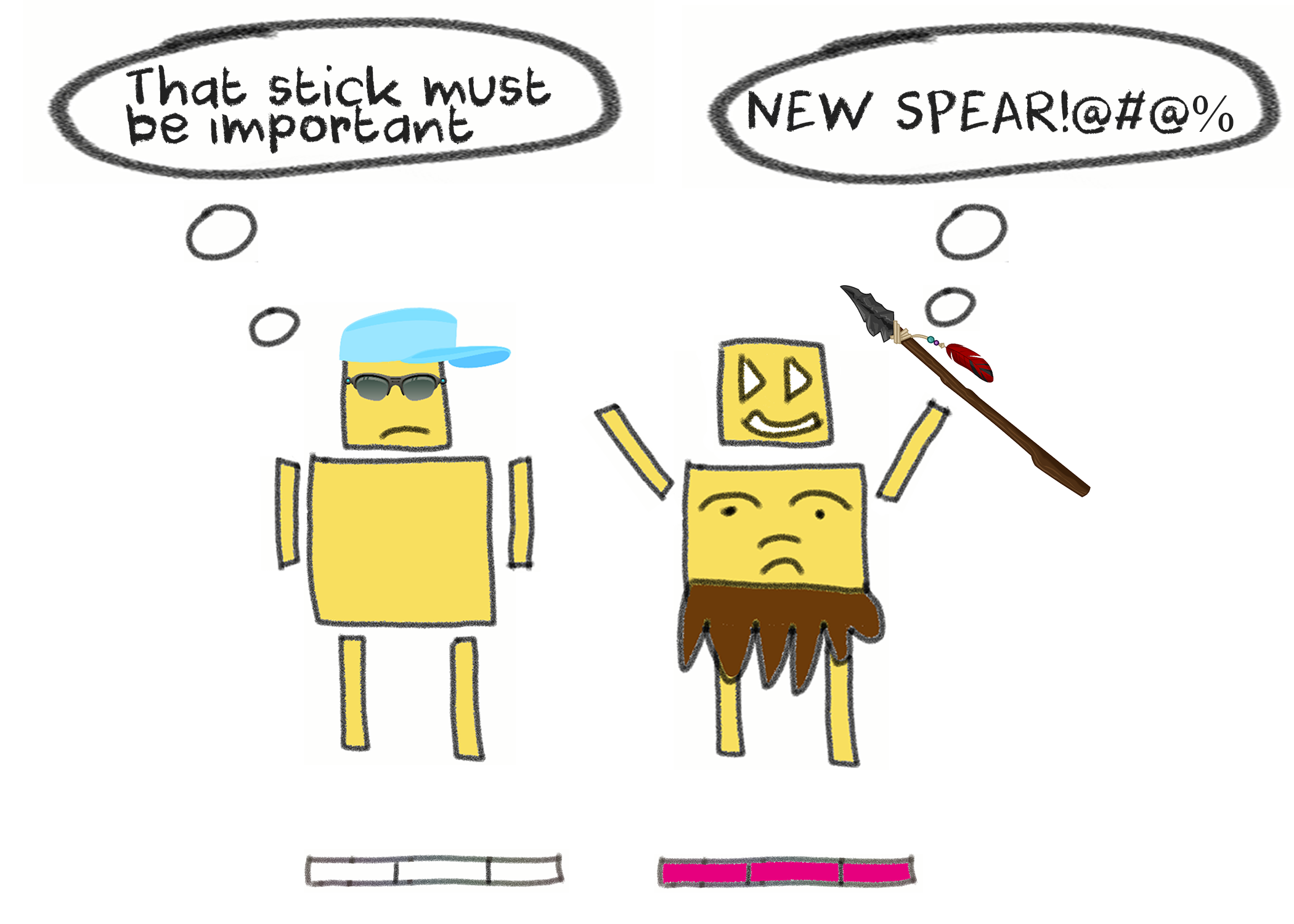 Endorphin is the “you can do this” chemical. During tough physical activity it helps us in two ways: it acts as a painkiller and an energy booster. For those who jog, think of the moment when you feel you can’t keep on running anymore, but still push yourself. At that point in time, endorphins kick in, eases your pain and give you a jolt of energy. 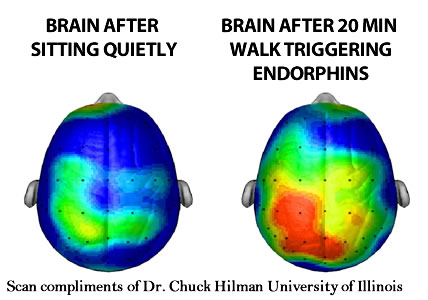 You can see how your brain lights up like cosmic aurora after just 20 minutes of walking, with noticeable improvements in attention power and information processing.

But endorphins have another important role: is tells us when we should stop doing something. It does this by giving us a sense of pleasure and closure, making us feel good about the task we’ve just completed. In social settings for example it signals when a meeting with a friend isn’t fun anymore so that we can end it or if our hands are sufficiently clean as we are washing them.

Colloquially known as the ‘love hormone’, oxytocin has some pretty potent day to day uses. It evolved as a reward for humans engaged in social behaviors and group building, since in prehistoric times humans who banded together had a higher chance of survival than those who were on their own. 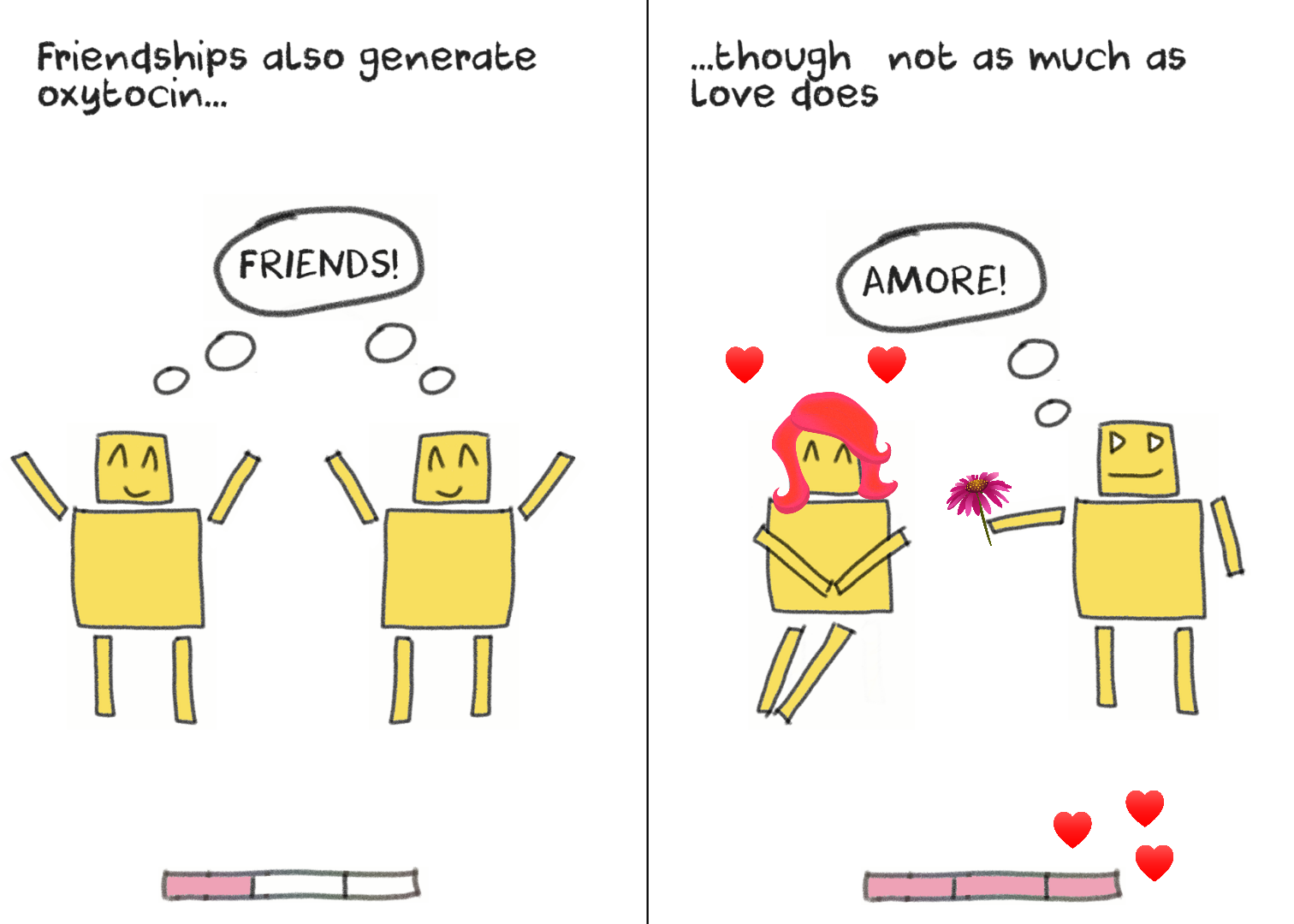 Being near someone we love seems to have a calming effect on us, that’s because oxytocin acts as a reliever of stress and anxiety, while inducing a peaceful and calm state of mind.

On top of that, oxytocin has been found to improve our general health by encouraging our body’s healing process, reducing blood pressure and cortisol levels (the stress hormone) and improving the functioning of your digestive system.

Turns out all those “love heals” quotes were on to something.

An important chemical in regulating our mood and emotional well-being, and a whole host of other functions, but one in particular stands out: it rewards dominant behavior and social status. Basically, our serotonin levels increase the more power and authority we have within a group. Why? Well, the person with the most power within a group is usually the one with the best access to resources. The important thing to note here is that dominant behavior is the source of serotonin, and not the other way around. 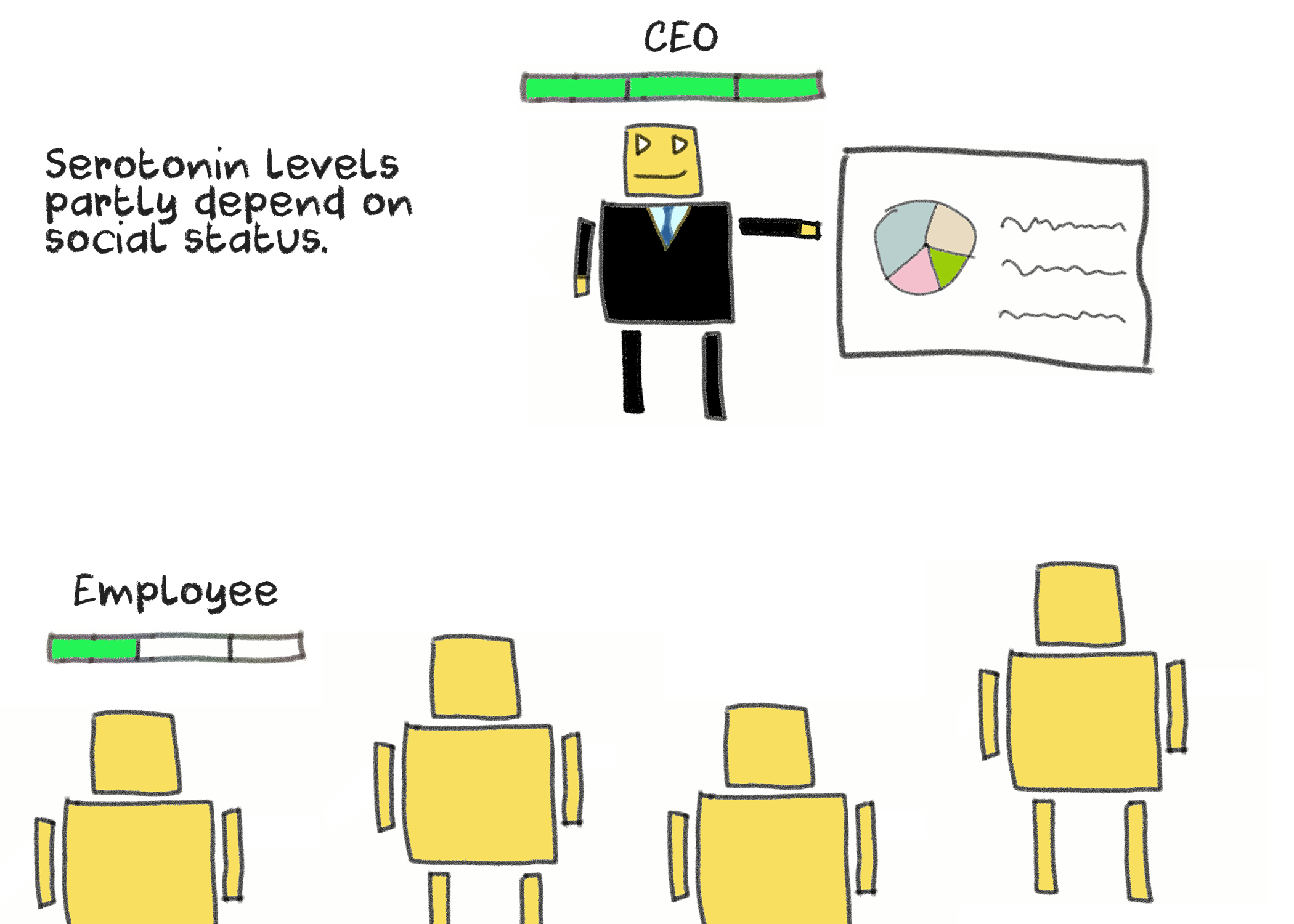 What’s more, we can tell from other people’s behaviors if they have high or low serotonin levels. Higher levels are associated with good social skills, alliance building and those telltale signs of leadership: somewhat distant, not too personal but warm and with a calm demeanor. Lower levels of serotonin are associated with the opposite: impulsiveness, more aggressive and conflict seeking behavior.

The stress chemical, cortisol functions as a warning sign, telling us that something is wrong and we should act to fix it. That’s why we want to eat when we are hungry, study overnight for tomorrows test or run away from a hungry lion. 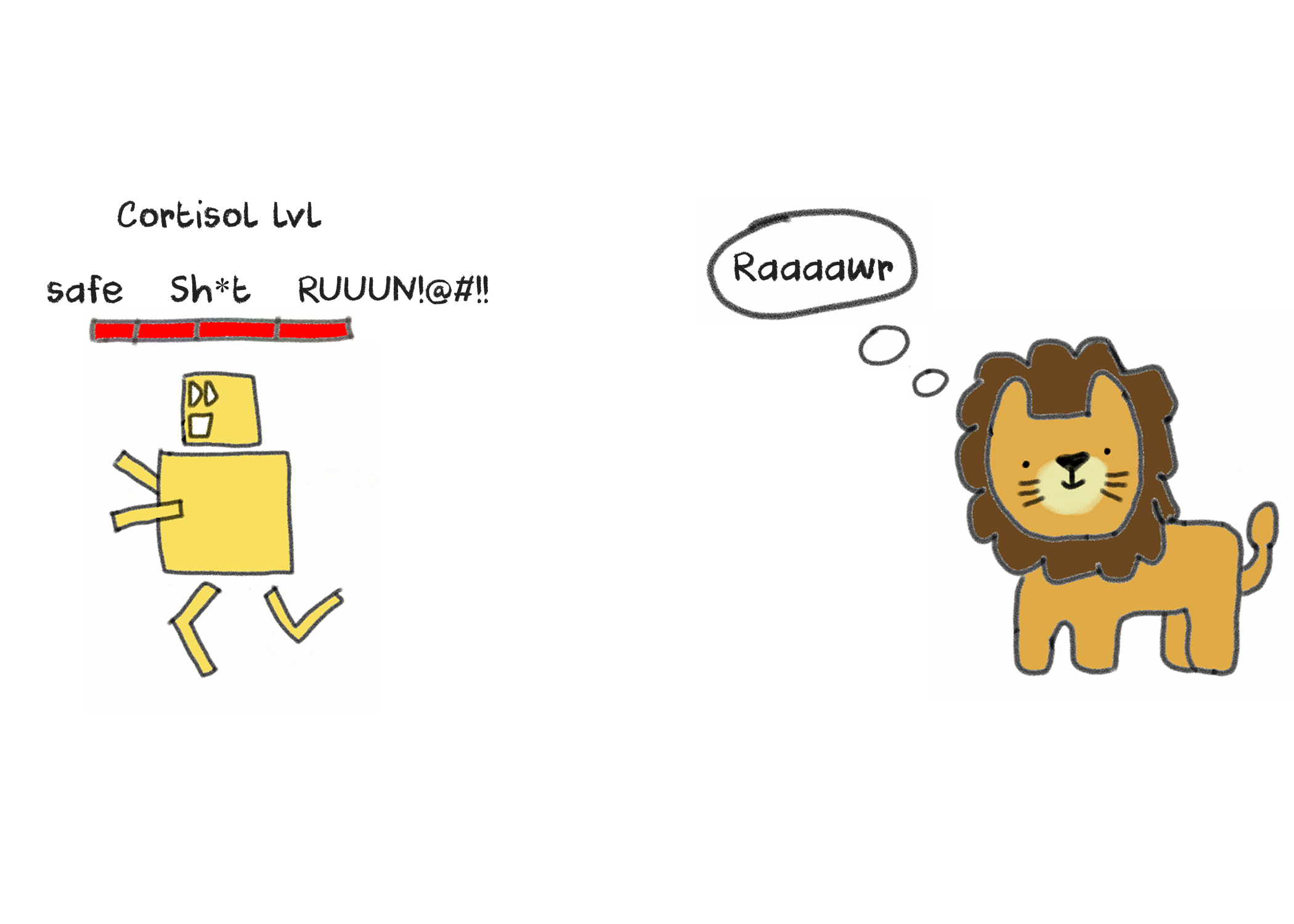 However, cortisol isn’t always connected to an instantly recognizable stimuli or source. That’s because our limbic system works in tandem with other parts of our brain to generate our behavior. And one of these is our cortex.

The cortex is responsible for rational analysis and detecting potential danger. It’s always “on” so to speak, constantly scanning our environment for dangers while releasing cortisol. And the cortex is really good at it’s job, since it never fails in finding stuff that needs to be fixed. This steady and constant release of cortisol gives us that nagging feeling that we should “do something”, even if we have no idea what it is we want to do. So if you ever find yourself annoyed by that nagging like feeling, blame it on your cortex and cortisol.

One important thing to note is that your brain doesn’t always know when to release chemicals, so it has to learn. Every time you experience something new, a neural pathway is created in your brain. The first time we do anything is associated with a dopamine rush, which functions as a reward for learning new stuff.

Our brain then wants to relive that high again, but the more you repeat an action the less dopamine is released. Eventually, the stimuli stops releasing dopamine altogether. That’s when you reach the point of boredom. Basically, you become tolerant of that particular stimuli.

This is actually a good thing, since boredom pushes us into finding new stuff that helps us survive, explore our world and just come up with new ways that make our lives easier.

What’s the science behind a habit? The answer is very interesting. Our brains are composed of billions of neurons, but we don’t use all of them in the same way. Certain neurons come to be associated with certain behaviors, and repeating those behaviors often enough will cover those neurons with a substance called myelin. Myelin greatly increases the efficiency of a neuron, thus encouraging your brain to use it more, diverting energy from normal, slower, unused neurons. That’s why we are more comfortable doing things in one particular way rather than changing it up.

Because of this, new behaviors are difficult to master. It’s hard to get comfortable speaking a new language because the neurons associated with it aren’t yet covered up in myelin, and aren’t as efficient. Myelination takes place mostly in our childhood, up until the age of 15. After that point, learning new behaviors (and skills) gets harder and harder as we age.

But don’t be fooled into thinking changes after that point are impossible. Ultimately, we do have rational control over our actions, and that allows us to shape our unconscious mind.

By purposefully repeating the same action over and over, we encourage myelination and creation of new neural pathways which release happy chemicals, creating a virtuous cycle and a positive habit. The most important thing for habit formation is persistence and consistency. It takes roughly 45 days of consistent repetition of an action in order to fully form a neural pathway in your brain. In the first few tries you may find it difficult, but it does get easier and easier over time.

An 900 word article can only say so much about a book, if you want the whole story, you can order it from Bookdepository and benefit from it’s free shipping policy.

If you would like to learn more about human biology, take a look at the best MCAT prep books.

We read good books and extract their best ideas to help you on your life journey. Subscribe for more articles.

It may be possible to slow down aging or even stop it. Here’s how.